The word archaeology is derived from Ancient Greek: arkhaiología, “antiquarian lore, ancient legends, history”, from arkhaîos, “primal, old, ancient” + lógos, “speech, oration, study”. It refers to knowledge of human prehistory, which is the time before recorded history. Archaeology is the study of human material culture, of remains and objects or artefacts. 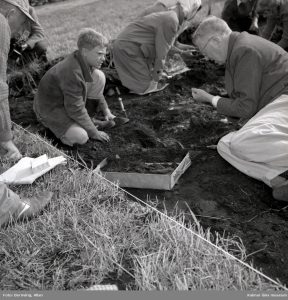 Archaeology became a separate university subject in the 19th century. In 1818, Caspar Reuvens became the world’s first archaeology professor at the Leiden University in the Netherlands. The first archaeological thesis in Sweden is usually considered to be Hans Hildebrand’s from 1866, followed by Oscar Montelius in 1869. In 1914, the first professorship in archaeology in Sweden was established at Uppsala University, with Oscar Almgren becoming the first to serve in the post. This was soon followed by a professorship at Lund University in 1919, to which Otto Rydbeck was appointed.
WHAT IS ARCHAEOLOGY?
WHAT DOES AN ARCHAEOLOGIST DO?